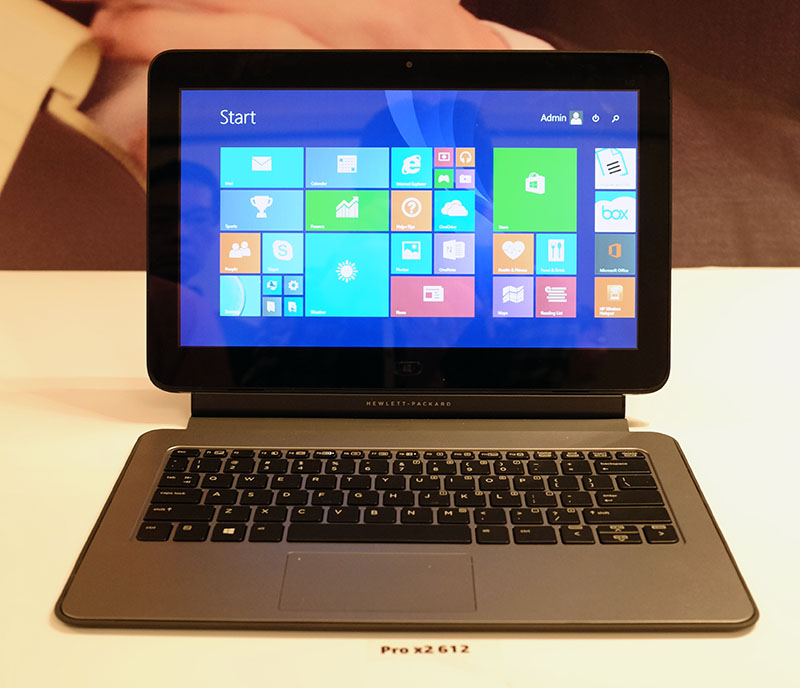 There are many similarities between Microsoft’s Surface Pro 3 tablet, and HP’s Pro x2 612: both are 12-inch touchscreen tablets powered by an Intel Core processor. Both run full Windows 8.1 on SSD storage. Both have thin and light keyboard peripherals and stylus pen support. But while Microsoft has prioritized portability, HP seems to be opting for versatility, with both a light and mobile keyboard peripheral and a standard docking keyboard that turns the tablet into a clamshell notebook with lots of connectivity available. But which 2-in-1 device is better?

The Pro x2 612 isn’t as thin as the Surface Pro 3, partially due to it using Wacom stylus technology. Microsoft previously used Wacom as well, before switching to N-trig with the Surface Pro 3, which let it shed some thickness. The tablet has an aluminum build, with a sleek, matte black finish on the back with the HP logo in the middle. 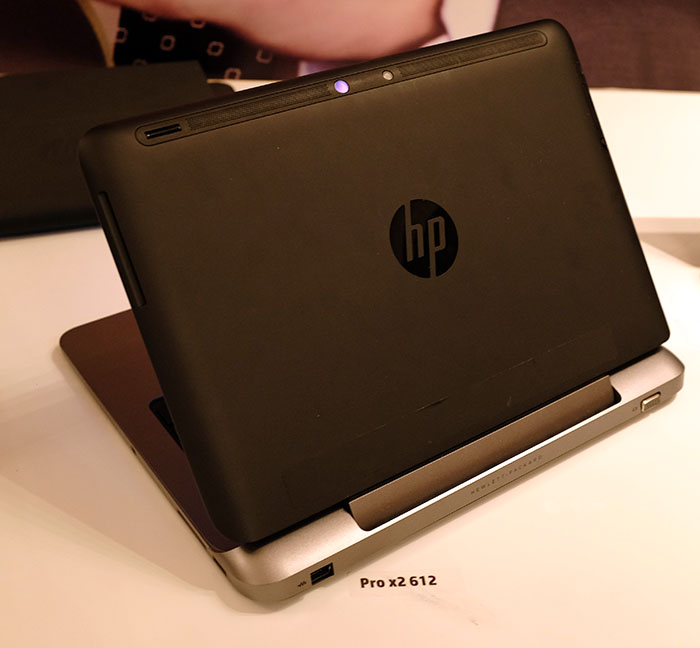 On the front, the bezel around the 12.5-inch Full HD 1,920 x 1,080 pixel resolution display is a bit thick, but isn’t too unsightly. The display is slightly larger than the Surface Pro 3’s 12.1-inch display, but the Surface Pro 3 boasts a slightly higher 2,160 x 1,440 resolution, although the Pro x2 is still plenty sharp. While the Surface Pro 3 has its Windows button on the shorter right edge, on the Pro x2, it’s located on the long lower edge. The tablet itself has decent connectivity, with the bottom edge hiding most of the ports. There’s a USB 3.0 port here, combo audio port, a Micro SD card slot, and a Micro-SIM card slot for 4G LTE connectivity. 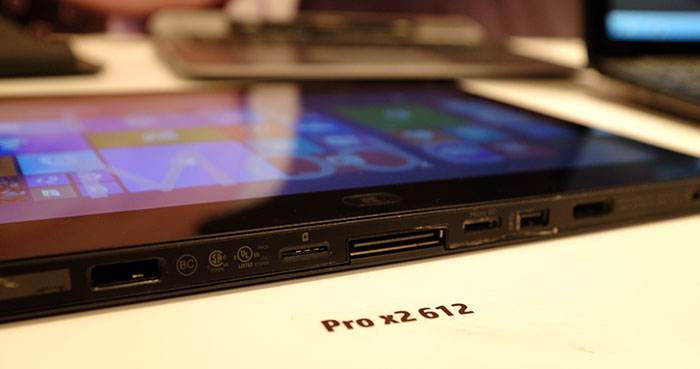 The tablet’s ports are all found on the bottom edge. As you can see, the tablet itself is rather thick.

Two keyboard peripherals will be available for the Pro x2 612. The Ultra Mobile keyboard is the thinner, lighter option, and includes a wrap around protective cover – although strangely, it leaves the ends of the tablet sticking out. 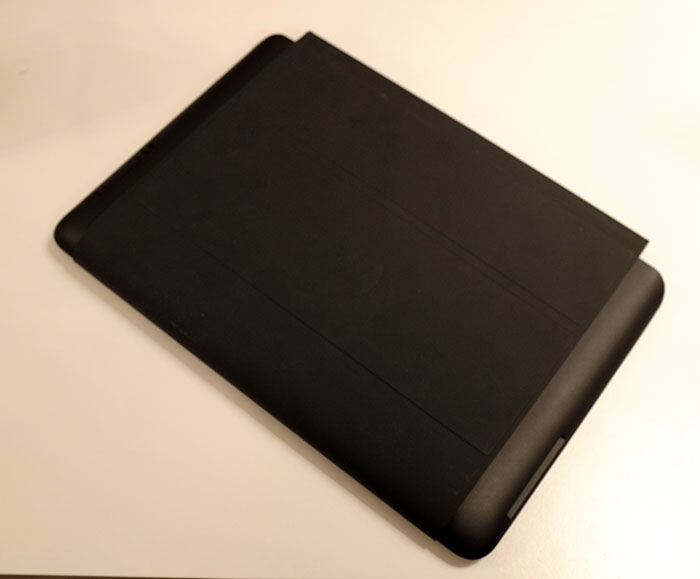 The Ultra Mobile keyboard has a cover that wraps around the device, but it doesn’t look like it fits very well.

The wrap cover can also be folded up to double up as a stand for the tablet, similar to Apple’s iPad covers. 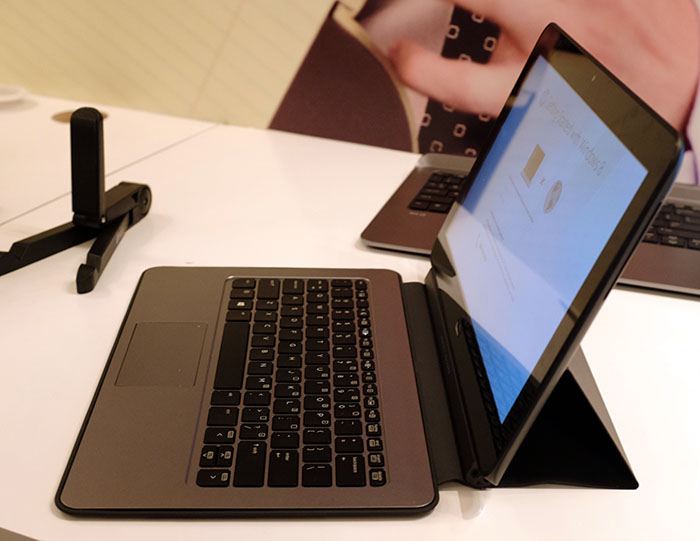 The keyboard connects via the Pro x2’s proprietary connector, and is backlit with a smallish clickpad at the bottom. The keys feel a bit shallow, but are well-spaced and fairly firm. 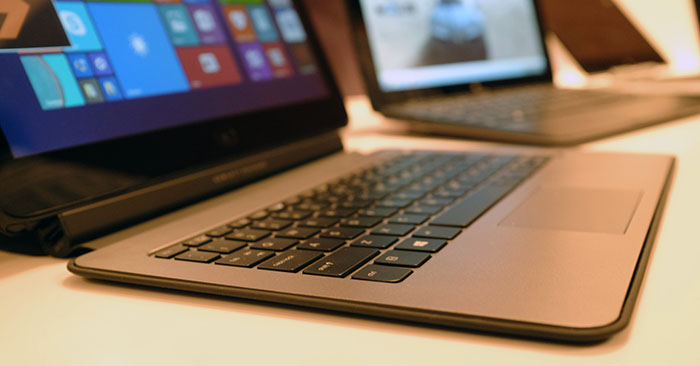 While fairly thin, the ultra mobile keyboard is actually not that light, due to its aluminum keyboard well, although this does provide with excellent stability. While it’s lighter than HP’s Power Keyboard, it’s certainly much heavier than the Surface Pro 3’s Type Cover. The keyboard has a few ports on it, with a USB 3.0 port and combo audio port but, since connecting the keyboard requires covering up the ports on the tablet itself, you don’t actually gain any extra connectivity.

The Power Keyboard is a true docking keyboard that turns the Pro x2 612 into a full clamshell notebook. While it’s rather thick and heavy, the keyboard itself feels great, with decent travel and firm and responsive backlit keys. 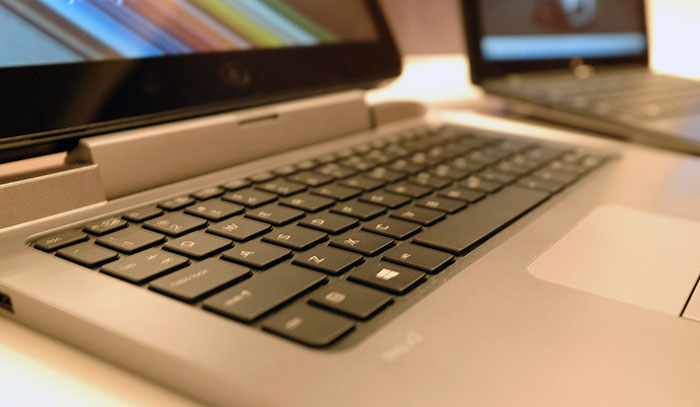 The Power Keyboard delivers a full notebook experience, with firm keys with lots of travel.

The trackpad has dedicated left and right click buttons. It also has a built in battery, which HP tells us will extend the tablet’s battery life from eight hours to around 14. The best thing about the Power Keyboard is the extra connectivity it adds, which many full notebooks would be jealous of. You’ll find a VGA port, DisplayPort port and Ethernet port, as well an SD card reader and two USB 3.0 ports. However, once again, as the keyboard covers the tablet’s own ports, you do lose some connectivity there too.

On the left you’ll find a DisplayPort port, USB 3.0 and an SD card reader.

On the right, you’ll find an combo audio port, another USB 3.0 port and HP’s proprietary connector for one of its UltraSlim docks (which adds more ports). 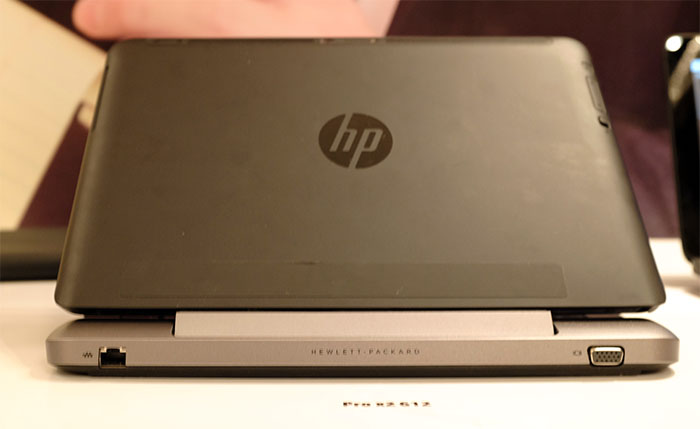 On the rear, you’ll find an RJ-45 Ethernet port and a VGA port.

The stylus is a fairly standard Wacom digitizer stylus.

As mentioned, the Pro x2 612 comes with a built-in Wacom digitizer stylus. The stylus sits in a slot on the tablet itself, on the lower edge. Frustratingly, this makes it a bit difficult to access the stylus with either of the keyboard peripherals connected – the top edge would probably have been a better location for storing the stylus. 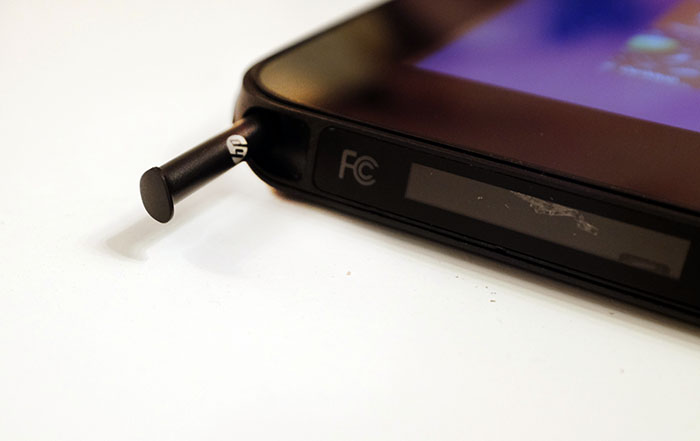 The stylus slot is located on the lower edge of the tablet, which can make it a bit hard to access with one of the keyboard peripherals connected.

Unlike the Surface Pro 3’s thick ‘pen stylus’, the Pro x2’s is a fairly standard thin stylus. In our limited testing, the stylus was accurate and responsive, and the Pro x2’s palm blocking technology seemed to work fine.

Anyone who isn’t completely sold on the Surface Pro 3’s Type Cover and wants to retain the option of a full notebook experience will appreciate the Pro x2. It isn’t as portable or innovative as Microsoft’s take on the 2-in-1 notebook replacement, but you won’t be lacking for anything. The connectivity on the Power Keyboard is superb, and the inclusion of standard enterprise security features like a TPM chip as well as HP’s own security enhancements like self-healing BIOS and HP Protect Tools, will certainly be appreciated by business users. The only real downside is the the weight and thickness. It’s not monstrously heavy, and compares reasonably favorably to other similar devices and enterprise Ultrabooks, but the Surface Pro 3 just blows it away in terms of portability.

While pricing for the Pro x2 612 hasn’t been released yet, don’t expect it to be cheap. The tablet and its peripherals are sturdy and well-built and, as an enterprise-aimed machine, it’s likely to cost quite a bit. The Pro x2 612 is scheduled to be launched in Asia in August, which coincidentally is the same month Microsoft will be launching the Surface Pro 3.